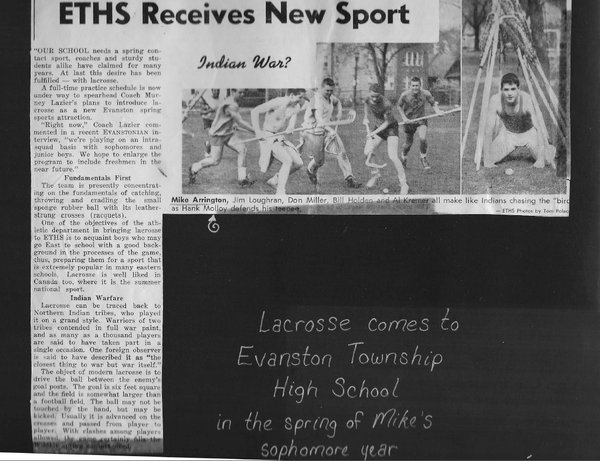 The Origins of Illinois Lacrosse - ETHS 1959
click to view /download pdf
Evanston is THE original Illinois High School lacrosse team.
In 1959, presumably inspired by stories of Syracuse University's Football/Lacrosse phenom Jim Brown, and with the help of several ETHS student-athletes, legendary Wildkit Football Coach Murney Lazier was the first to put lacrosse sticks in the hands of ANY Illinois high school athletes.  To The Coach, it may have initially served as an means to gather his football team for otherwise "illegal" spring practices, but the founding student-athletes (who were also football players) were pushing for a new, cool Spring Sport.  Murney quickly came to love lacrosse too and even ventured "out East" to really learn how to coach the game.
The first Interscholastic lacrosse game in Illinois was played in Spring 1968, between the Wildkits and New Trier East "Indians" (Witnesses report ETHS prevailed in that one.). By the mid 1970's there were 4 "inaugural" HS teams: Evanston, Oak Park, New Trier West, New Trier East.  The spring seasons 1980>1982 supposedly saw no ETHS Lacrosse teams.  But Our Program restarted for the Spring of 1983 and has been continuous since.
If you have any history of ETHS lacrosse you can share, please contact either of our Webmasters: mayner@eths.k12.il.us or fournier@eths.k12.il.us
Some recent emails from early ETHS Lacrosse Alums:
From: Greg Cook <> (Greg Cook is the donor that created the Dana Heumann award)
Date: Thu, Jun 5, 2014 at 11:23 AM
Subject: Re: BLAX: Evanston upsets Stevenson 9-8 in Dramatic Overtime Playoff Win!!
To: Coach Mayne, Vern Smith <>

congratulations, coach + team.
Back In The Day:
1964-1967, ETHS was the only high school LAX team in Illinois.  We had 4 squads, composed entirely of members of Murney Lazier's championship football team players (plus me, a non-football playing runt).  Two days a week we did drills that did not involve use of the stick.  Some skeptics accused Coach Lazier of clandestine spring football (not allowed under IHSA rules).  Yes, the drills bore a close resemblance to blocking and agility work.  Two days a week we did drills involving use of the LAX stix and ball.  On Wednesday and  Friday, we played each other.  The Wednesday Rules permitted moving picks and allowed  locks on the opponent from head to toe.   At the end of the spring LAX season, all 4 squads celebrated a State Championship.  In 1968, New Trier East started a team.  ETHS had no trouble humiliating them twice.  It was lots of fun.  We also played 2 games that year against lake Forest College.  In Game one, we whipped them.   They were probably high on Nixon and Agnew.  Lake Forest demanded a rematch a few weeks later and outscored us, but never beat us.
Those were The Days, eh?
Congratulations to all of you 21st century Wildkits..
============================================================
From: Mike Grunsten <>